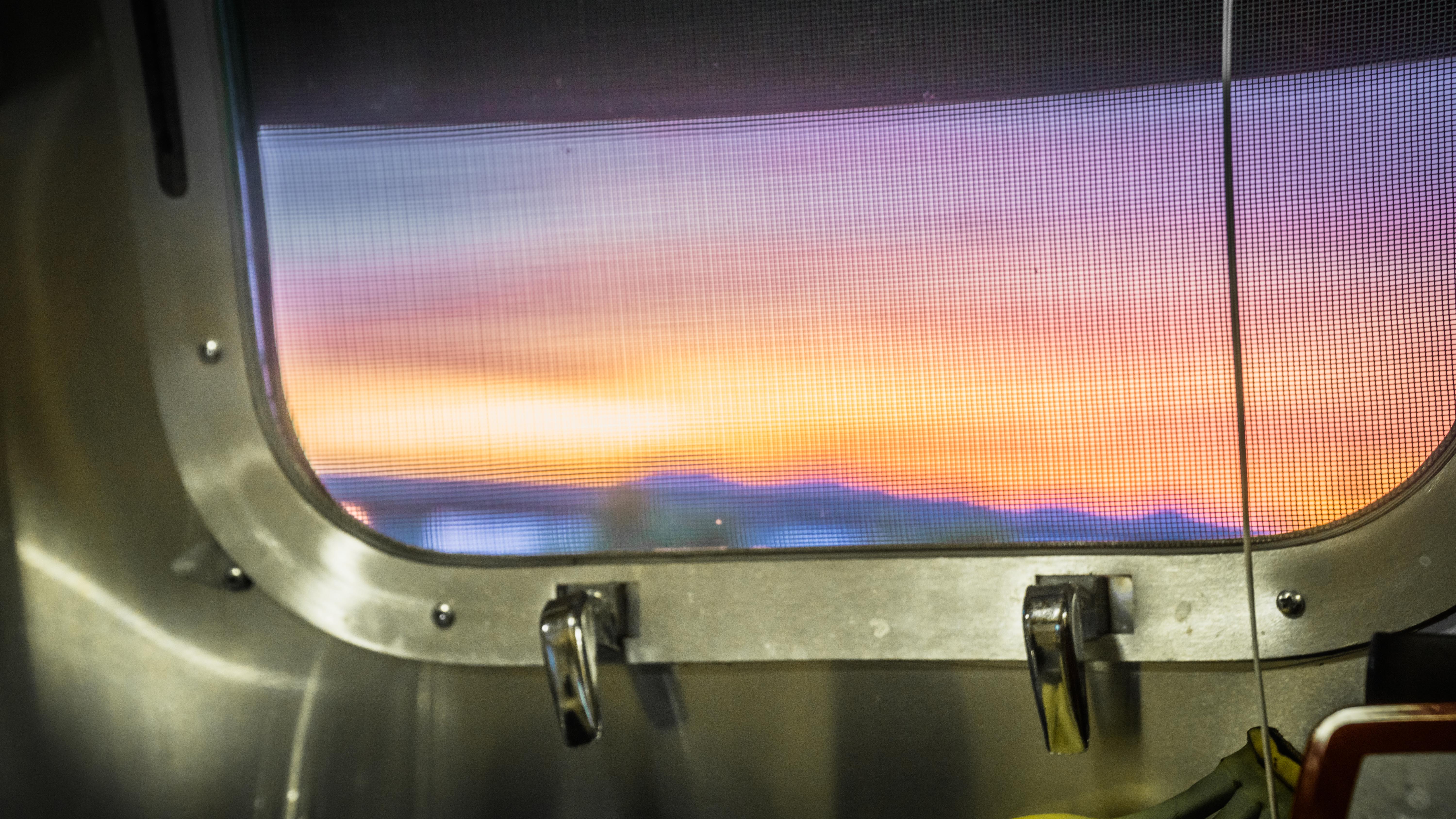 My wife and I are 37 and 34, respectively, and we quit our full-time jobs and hit the road as full-time digital nomads traveling in our 30' Airstream travel trailer. What an amazing way to live your life.

We get to see much more of our country than we ever thought possible. We also meet different folks from all walks of life and gain an understanding of how people live in other parts of the country.

Being a digital nomad is generally wonderful, and after three years of traveling the country in our Airstream, here's what we learned about what it's like to be a full-time traveler.

What we learned as digital nomads

You don't need a ton of space

If you listen to most advice, then you'll probably buy the biggest RV that you can possibly tow. Because in this country, bigger is always better, right?

That advice is bullshit.

The truth is traveling brings up a unique set of problems that most of us who live in traditional sticks and bricks homes probably never think about.

To put it bluntly: It’s a bitch to move a whole ton of stuff – and, it’s way more costly. In general, the bigger your RV, the more expensive it will be to buy, maintain and move.

We live in a 30′ Airstream Classic. It adds up to about 200 square feet, and arguably, it’s too big for us. Though it’s probably not worth switching out for a smaller RV at this point (because we’ve renovated so much of it), if we had to do it all over again, we’d go smaller.

Trust me, I understand. One of the benefits of pursuing a life of full-time travel is nature. You get to escape the travel, smell and crowds of big cities. And, it's true that being out in nature can be incredibly freeing.

If you’re used to dodging people and cars all day in your everyday life, then yeah, you’ll want to escape those cities any chance that you get.

But when you live in an RV, things get a bit more interesting. Cities come with amenities, and those amenities are sorta convenient. Like water, for example. Or a grocery store. For me, the gym is an amenity I like about cities.

It’s one thing to just spend a weekend in the middle of nowhere, but for some of us (like me), I just couldn’t spend my life in total isolation.

I’m happiest when our home is parked a short drive away from civilization. Say, five or 10 miles. I like the quiet and solitude of living outside major city centers, but damn it, I also want my Internet access. In fact, I need it. Like, it’s a legit need.

Therefore, I can’t completely escape the bounds of civilization too much.

Instagram can be deceiving. You know all those beautiful photographs that you see on Instagram? Photos of places that you’d love to see? While some are easily accessible, others are just a pain in the ass to get to.

And once there, civilization may or may not be anywhere around that beautiful mountain, lake or wildflower. Or even a campground. You might be backpacking it in, sleeping in a sub-zero sleeping bag and getting your ass up at the crack of dawn to truly live that photo you saw.

Because chances are, it wasn’t taken at noon.

Granted, there’s not necessarily anything wrong with that. In fact – if some of the most beautiful places were super easy to get to, we’d see pictures of those places all over. While still super cool to photograph, it doesn’t have that same appeal as some of the outrageous photos that you see on Instagram or in magazines of places that take extreme effort to get to. And getting out of bed super early for the best light.

Of course, many of those photos are edited in Photoshop, too.

We need to appreciate basic stuff much more

Personally, I enjoy running water. It's kinda cool. So is flushing your toilet and watching all that former food and drink disappear into the plumbing system – hopefully never to be seen again.

In an RV, things don’t work that way. You gotta haul that shit (literally) with you where ever you go. And, you gotta get water to your sinks. And electric.

The things we take for granted living in a fully-connected house suddenly become very real when you leave the modern amenities available in traditional houses.

To help, we have 500 watts of solar on top of our Airstream that feed our 440Ah battery system. On sunny days, we can easily run virtually all of our equipment (including computers and an external computer monitor) without draining our batteries a bit.

On cloudy days, though, the trickle of solar cannot keep up with our typical electrical draw.

In a traditional sticks and bricks house, we wouldn’t (and didn’t!) think twice about that stuff.

But living on the road (and not parked in a “full hookup” campsite), the simple things like electric, water, and sewer become a problem that demands attention. If you screw up, the consequences are terribly inconvenient, too.

Dead batteries are expensive. Over-filling your black water tank (the tank that holds the sewage from your toilet) is a smelly mistake – and one you only make once!

You suddenly become a relationship problem-solver

It’s amazing to me how many people think they couldn’t live this lifestyle because of the proximity to their spouse! It’s not just space. Or the travel. Or thinking about the amenities.

No, they are afraid that they’d drive each other batty.

You’re married. You’re supposedly in love with one another. Friends, even. But yet, the thought of spending large amounts of time around one another seems akin to pulling your nose hairs out one-by-one. You can do it, but it’s also painful and you’d rather not.

“Because we don’t hate each other,” I respond in my head. Even in such a small space (the square footage of our Airstream tends to be one of the smaller of the RVs that we see), there are still ways to maintain your own separate spaces. Even though I can turn my head and see my wife sitting on the couch not more than five or six feet away, it’s never been a problem.

It works for three primary reasons:

Goals, you say? Yep. Since my wife retired at 33, we’re both active in the social media community.

We have a YouTube channel and the accompanying blog. We also have this blog, and my wife is determined to double its pageviews. We’ll bounce ideas off of each other. Ask questions. Work together toward the same end.

It’s almost like a little office space and we’re two co-workers hollering over the cubicle walls at one another with questions or suggestions.

People might assume that you're super rich, but most think we're dreadfully poor

When people find out that we live in an RV, most naturally assume that it’s not by choice. Instead of making the conscious decision to live a simple and sensible lifestyle, so many will assume that we’re poor. That we don’t have the money to live, well, just like them.

Or, a few will assume precisely the opposite…that we’ve sold a business and made millions of dollars and don’t need another job based on sheer net worth. We must have made a ton or won the lottery, so why not travel the country while we still can. With $10 million in the bank, why not?

The truth is we only have about a tenth of that $10 million. But, we DO travel the country because we can – and we might as well do this while we can. Both my wife and I are relatively young, healthy and full of energy. What better time than now?

You will probably become instant friends with other full-time travelers

I have a bunch of problems, but making friends ain’t one of them. When you live a life on the road, you almost become instant friends with every other RVer that you meet.

RV’ing is one of those lifestyles that seems to build external relationships almost automatically. Like two Arizona Cardinals fans who instantly gravitate toward each other after being dragged to a SciFi convention that they have no interest in – on Sunday. Instant connection.

We’ve met so many people along our journey.

An invite to happy hour is very common (almost expected). We immediately talk about things that might seem too personal in any other lifestyle. Like our motivations for traveling. Monthly budgets.

And, all kinds of shit that we completely screwed up along the way with pulling (or driving) a 20,000-pound death machine on wheels.

Like forgetting your truck has an exhaust brake and gutting your brake pads on a steep 8% decline down a Colorado mountain pass (hypothetical!).

Before we started our new lives of full-time travel, meeting people and, well, communication with others was a common question asked of us. But, it didn't turn out to be much of a problem at all.