Reviews of Fiverr: is it the best freelancer platform?

If you've ever thought about using Fiverr, but you're not sure about making the leap, here's what you need to know.

Fiverr is a platform that helps connect freelancers with people searching for their services.

Each freelancer offers digital services that are referred to as “Gigs”, and anyone is free to make an account as either a buyer or a seller.

Why is it called Fiverr? Originally when Fiverr debuted everything that was offered on the site was a maximum of $5.

It was a neat concept that worked wonderfully...for a while. Pretty soon after the site’s inception, people started gaming the system by requiring people to buy multiple gigs for certain services so that they could charge more than $5 for a single service.

Over the years there have been a few different variations on the pricing model, but as it stands today; gigs can range anywhere from $5 - $995.

The old adage “you get what you pay for” certainly comes to mind when you’re dealing with $5 freelance services, right? Don’t worry, Fiverr has some strong checks and balances in place to make sure that both buyers and sellers are safe.

I do have a couple tips regarding your vetting process for freelancers. You should be sure to check out a seller's reviews and feedback before committing to a purchase. Additionally, Fiverr has a tiered structure for their sellers based on the numbers of gig they've sold, and the amount of positive feedback they've received. I always do my best to find a top-rated seller, but I have also found lesser known sellers that have provided fantastic quality.

As you can see in the image below; this seller that I’m considering using for a logo design project has over 5,000 reviews with a 4.9 overall rating– so I feel pretty confident in their ability to complete the gig.

I've used Fiverr for a few logo design projects before and it should be noted that you'll need to be patient. Although some of these sellers offer "24 hour logo design with unlimited revisions!", I have experienced a few sellers that will deliver a very rough sketch within that 24 hour time period, and then the revision process can drag on for quite some time.

There is also a dispute resolution center if you are having a customer service issue that you can’t resolve directly with your freelancer. Although I have never had a problem that required dispute resolution. Not necessarily because everything turned out perfectly each time, but anytime a project has been delivered to me that was below my standards, I have been able to come to an amicable resolution with the seller each time.

Ultimately, I have been happy with the end product of each gig I’ve purchased and it's clear that customer satisfaction is important to Fiverr.

Update: Since this article was originally published, I did end up having to contact Fiverr's customer support team for a quality issue I was having with a seller, and they promptly responded and resolved the issue.

My Experience With Fiverr as a Buyer

I’ve helped many small businesses with their digital marketing, so, I’m often assigned big projects that have itty-bitty budgets. Since I discovered this site in 2012, I have successfully delivered dozens of projects under budget by utilizing the services of Fiverr’s freelancers.

In the past 8 years I have used Fiverr to help me with projects including graphic design, data entry, and promotional video production. I can honestly say that by using Fiverr’s freelancers, I have saved thousands of dollars.

My favorite gig that has saved me the most money over the years is for voice over actors! I don’t have an exact dollar amount, but I have definitely saved thousands of dollars by using Fiverr sellers as the voice talent for dozens of marketing videos that I’ve produced for my clients. Fiverr has given me the ability to work with professional voice over artists (some of which have national credits) for a fraction of the price that I would have paid otherwise.

However, Fiverr is not a platform that’s exclusive to professionals or marketers. In fact, it can be useful for just about anyone. For instance, it might be nice to have some custom invitations made for a birthday party, or some personalized t-shirts for a bachelorette party. Maybe you need some tutoring to learn a foreign language, or you want a custom logo for your fantasy football team?

Whether you’re a professional, or a private person, I’m willing to wager that if you poke around Fiverr for a few minutes– you’ll find something useful for you at a rate that you won’t be able to find elsewhere.

My Experience With Fiverr as a Seller

If you’re looking to supplement your income with a side hustle, Fiverr could be a great fit for you.

Signing up to become a seller on Fiverr was a breeze. It took less than 5 minutes before my account was all set up and I was on my way to creating my first gig. 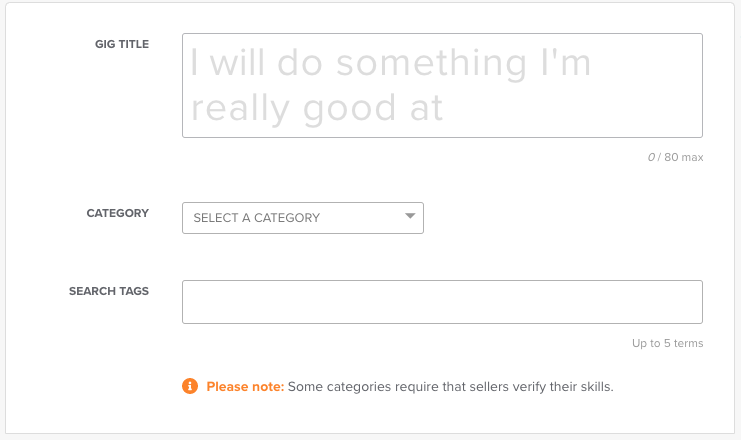 As I mentioned earlier, Fiverr gives you the option to list gigs starting at $5, all the way up to $995. You can also customize different packages that allow you to charge more for gig “extras”, like quicker delivery time.

You should know upfront that Fiverr takes 20% of each sale. While 20% is a hefty sum, I did make sure to adjust my prices accordingly so that Fiverr's commission didn't cut too far into my margins.

*a note of caution for sellers*

If you’ve never freelanced before, you might not be aware of a common pitfall referred to as “scope creep”. Scope creep occurs when you and a client agree on the parameters of a project, but as you begin to work together, your client expects more work than was initially agreed upon and before you know it– you’re losing money on the deal.

Sarah from Portland weighs in on a time she experienced scope creep on Fiverr:

“I absolutely love editing other people’s writing, so I figured offering editing services on Fiverr would be a fun way to supplement my income. I was so excited when I got my first client, until I realized that the text the client sent me was over 5,000 words! That was way more work than I had ever expected someone to send. In the end, I didn’t make very much from the sale– but it’s also my fault for not specifying a word limit on my gig. On the bright side, that’s a mistake you only make once, and I hope this cautionary tale helps other sellers avoid that blunder!”

Fiverr is great for anyone who is trying to save a few bucks on professional services, as well as anyone who is looking to make some quick money, or start a side-hustle, by utilizing their talents.

If you haven’t signed up for Fiverr yet, we’ll make it a little bit easier on you. Click below for 20% off your first purchase!

Sean
Sean is a writer and entrepreneur that has a passion for all things personal finance. When he's not writing about finance, you can find him at the nearest steakhouse.