FIRE is for everyone, and this author will tell you exactly how to achieve it: Money School with Lacey Filipich

School doesn't teach you everything you need to know about finances to be successful. Lacey Filipich seeks to fill in those gaps.

Did you know that one of the largest growing populations of homeless people across the world is women over 50? A combination of outdated gender roles, recessions, and a lack of financial savvy has led to a major rise in homelessness in this vulnerable population. This is especially apparent in Australia where author, speaker, and overall money master, Lacey Filipich lives. Filipich found healing from her own trauma through the FIRE movement, and she realized she was in a unique position to help other people avoid financial mistakes and potential homelessness with her perspective. 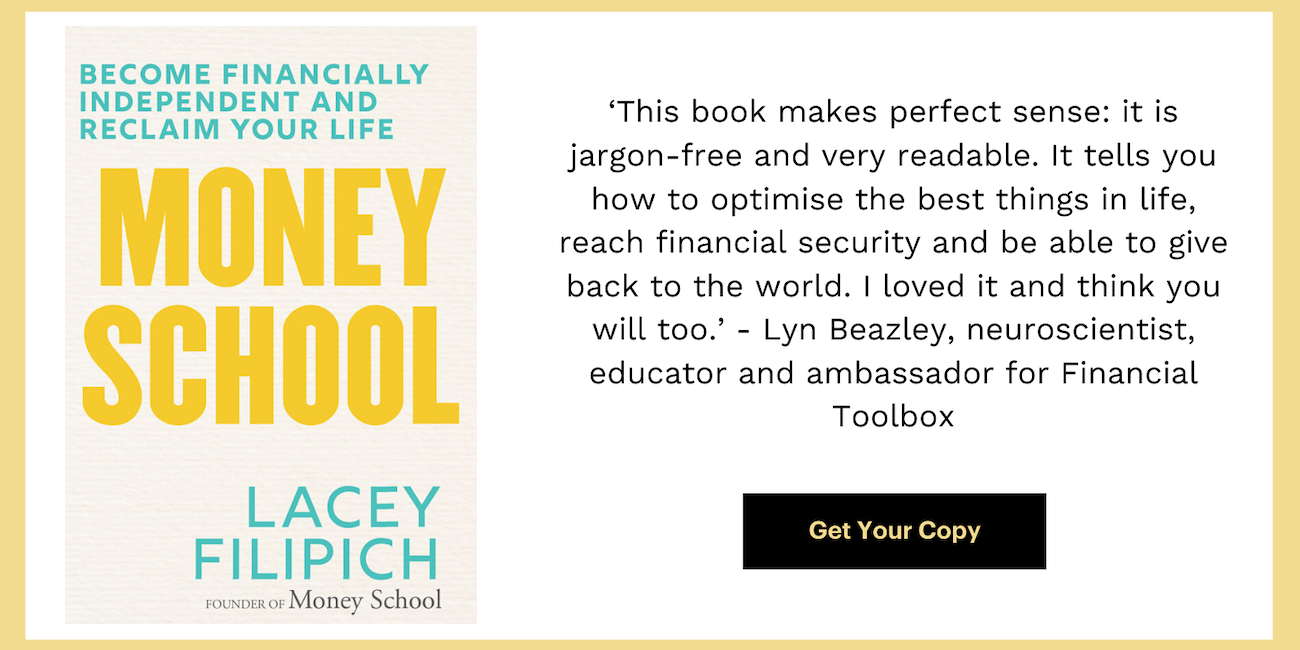 After an early life of financial ups-and-downs, and a lot of hard work from her mom to keep their family afloat, Filipich’s journey to financial independence started at age 19.  She purchased a tiny investment property in her university town. She scraped together enough savings to purchase a 2 bedroom 1 bath apartment, and worked out that owning her own place was $160/month less expensive than renting from someone else. With this realization, she felt empowered to be in charge of her own destiny. Filipich became aware of the fact that investing in real estate was both a way to earn money and avoid ever having to worry about her living situation.

Next, Lacey realized she could fix her property up and rent out her spare rooms to other students. After about 18 months, the apartment was paying for itself and Filipich was beginning to understand that she could make her way through the world in her own way--with pure grit, hustle, and a big smile.

Flash forward a few more years, and a few more investment properties across her corner of Australia. Lacey wanted to share what she had learned about money: essentially everything nobody ever bothered to teach in school.

She experimented with giving her take on FIRE as a way out of generational poverty in a hugely successful TED Talk, and thus the concept for her book Money School was born. Lacey Filipich put pen to paper to give us the financial tools and FIRE tips we never learned in school.

What Money School has to say about achieving FIRE

The following is an excerpt from Money School:

A lot of advertising and media about the banking, finance and superannuation industries can make you feel unqualified to manage your own money. It looks too hard, too complicated, too overwhelm-ing. The jargon sounds like a foreign language, so you feel you need a translator. You might worry you’ll make a mistake or miss an oppor- tunity because you’re not an industry expert. That’s enough to put most people off. We’d rather pay someone to do it just so we don’t have to think about it or spend the time to get up to speed, or simply so we sleep better knowing an expert has us covered.

But when you boil it down, there are only three rules worth knowing in personal finance. They are:

Even the maths is straightforward – it’s just algebra, and not exactly advanced algebra. If you were in your teens studying maths at school, you’d recognise all of it. If you can do simple addition, subtraction, multiplication and division, you’ll find a balance sheet easy.

So, who is Money School for?

Anyone and everyone. It’s that good a read. But ultimately, Lacey wants to make the concept of FIRE accessible for young people, people who have experienced the gender pay gap, and, of course, the fastest growing group of homeless people across the world: women over the age of 50. She firmly believes that the only reason people aren’t joining the FIRE movement in droves is that they don’t have the tools to do so.

Lacey’s number one tip for getting up and running with the fire movement? Pay yourself first. Automating your savings and bills means you never have to think about whether you can afford groceries with what’s left in the bank. With basic needs (like housing and electricity) covered, and some money sent to savings, the stress of being able to stay afloat through hard times will be alleviated. You’ll never regret saving too hard!

What do you think is the first step to getting started in FIRE? Where did your FIRE journey begin? Let me know in the comments!